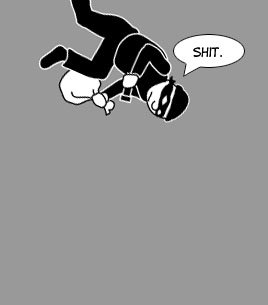 There is no graceful way to plummet through a suspended ceiling while carrying a bag full of pornography, a fact that I was made aware of quite abruptly. And though my lack of grace is what would bother me most when thinking back upon the event, the possibility that I was now physically incapacitated was far more important at the time. But I was fortunate. Judging by the regions of my body that were screaming in pain, it would appear that I broke my fall by landing entirely on my face.

I rolled onto my back, and consider the other potential repercussion stemming from my sudden entrance to the room. A random polling of every security guard within three miles of me would probably show that my current level of stealthiness was ‘Not very.’ But again fate smiled upon me. After five minutes of lying still and trying not to breathe through my face, no-one had come to check what that enormous crash was.

I stood up and surveyed the room. My ex bosses office was exactly as I remembered it, excepting the pile of ceiling tiles, dust, and pornographic magazines in the corner. Although still a little disoriented from my tumble, I was pretty sure those hadn’t been there the last time I was here. That’d have to be cleaned up.

Two days earlier I had entered this very office, asking for a raise. My initial explanation (“Because I want to buy more stuff”) didn’t elicit a favorable response, and the conversation very quickly turned into a job performance review. A horrifically unfair job performance review as it turns out; one that focused substantially more on my weak points (job performance) than on my strong points (hair, fast reflexes.) By repeatedly slapping my boss then darting away before he could react, I hoped to demonstrate what an invaluably quick worker I had become, but to no avail. There would be no raise for me.

Also, I got fired.

Fumbling in the dark, I popped a floppy disk into his computer, and powered up the machine. The computer paused in its boot cycle, detecting the disk in the drive, then started chattering away in that way computers do when they’re talking to floppy disks. My gravity-centric entrance to the room already forgotten, the noise of the floppy disk made me nervous. I quietly threatened the life of the man who invented floppy disks. How old were floppy disks anyways? The guy might be dead now actually. Maybe I’d just send a nasty letter to his widow.

I had spent most of last night on the Internet telling my story to various computer hacker types, trying to illicit help to “hack the holy ass shit out of my old employer.” Although most were willing to help directly, a sympathetic soul called WaxOV_1n_YuR_H4!r had been willing to give me a script that would crack my ex-bosses password and let me send email from his account. All I had to do was get access to his computer, plug in the floppy disk, and wait.

I adjusted the equipment in my espionage pants as I waited for the computer to boot up. The salesperson at Old Navy initially hadn’t understood what I was talking about, but after some discussion and animated hand gestures, she seemed to figure out what I was looking for. I tugged my spiffy new black cargo pants downward slightly, shifting my espionage flashlight to a different pocket, and adjusting the espionage screwdrivers that were riding uncomfortably close to my regular, non-espionage testicles.

The computer booted and I sat passively watching the script do its work. WaxOV had said it would take almost 15 minutes to chug through. Evidently it needed to download something from the Internet. In the meantime, I started on the first prong of my two pronged assault plan: hiding pornography around the office.

My overall plan was simple. As previously mentioned, Prong 1 involved hiding pornography around his office, with the hopes that it would be discovered by his superiors. To prompt a search of the office, Prong 2 would involve sending inflammatory emails using my bosses email address to his superiors.

Prong 3, which I had just come up with on the spot, involved taking a dump in a potted plant. I felt really good about it afterwards, proud of the way I had taken a fluid situation and improvised like that. Just like a jazz musician. I recall reading somewhere that there was a lot of improvisation in jazz. I can picture a bunch of great jazz musicians just grooving together, playing great music, laughing and crapping in each other belongings as a surprise. Awesome.

Humming the chorus to Kenny Loggins Highway to the Danger Zone, I finished taping a copy of Really Enormous Beavers to the bottom of a desk drawer when the computer gave a little beep. I went over to see if the script was done, and saw the following on screen.

Looking back on it now, “That’s an odd name for a password cracking script.” should have immediately been my first clue that something was amiss. But I was too caught up in the excitement of my first hack, and involuntarily leaned in closer and closer as the script counted down to zero. At which point I was deafened by the speakers as they burst out:

WaxOV had double crossed me. With an obviously Russian name like that, I should never trusted him. I smacked at the keyboard to cancel the script, but it had locked up. The speakers were the old cheap kind without a separate volume control, and for some reason the computer power button wasn’t working. I jumped up to run around to unplug the machine from the back as Eazy E continued his sonic assault:

I Rip your fuckin face outta a magazine O.G. gangsta lean now after I shit
Your face wipes that ass clean now time to get tipsy and don’t want a bitch
If she can’t rub the balls like a gypsy.

As I sprinted around the desk, I placed my foot on a copy of Extremely Slick Orifice Revue, which fittingly enough, was impressively frictionless. I skidded across the room, my face once again acting as some sort of magnet for violent impacts, and collided with the arm of a couch. I collapsed in a heap as Eazy E’s soothing voice gently sent me on my way across the sea of unconsciousness.

Who’s all in? Since you put yourself on my dick I put my nutz on ya chin…

I came to with a cleaning lady eyeing me suspiciously. She had unplugged the computer, presumably to stop an endless loop of Nutz On Ya Chin from distracting her from her work. The absence of the song is presumably what had jolted me back to consciousness.

I had come to rest beside the couch, with the copy of Extremely Slick Orifice Revue laying open beside of me. To any sane observer it would look like I had masturbated myself to exhaustion. Explaining my true intentions to the cleaning lady would take time that I – glancing at my watch – really didn’t have to spare.

I quickly stood up, fell down, reevaluated my plans for a few seconds, then stood up again, this time slower. I walked over to the computer, popped out the floppy disk and turned to walk out the door.

“Are you ok sir?” the cleaning lady asked.

“No hablas inglés.” I replied, and then thinking quickly, added “Senorita…” with a wink. Now if anyone asked her who she’d seen, they’d get a description of a charming Spanish gentlemen wearing attractive black pants. I again admired my own sense of improvisation – all the more impressive considering I probably had a concussion. In the stairwell, I removed my pants to transform back into my normal non-Spanish self, and proceeded to walk calmly from the building, falling down only twice more on my way home.

5 thoughts on “Tales Of Corporate Espionage!”